Get to know Jenn Strathman 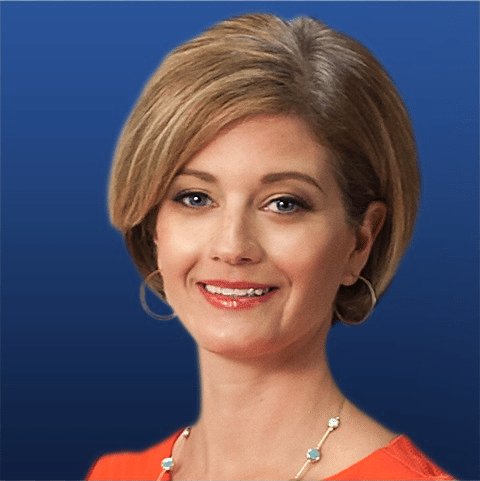 I spent 16 years helping consumers and exposing ripoffs on TV. As a new mom, that journey continues to help you be a better parent and consumer.

So many of you have asked me for consumer advice throughout the years from whose the best contractor to hire or how not to get ripped off when buying a car. Your questions prompted this website.

The site started out as Jenn Strathman and has morphed into Consumer News Mom as the focus is on consumer issues and parenting.

It’s a resource guide to empower you to make smart consumer decisions like saving money.

While I got my start solving your problems, I’m branching out now that I’m a new mom. I’ll be solving everyday mommy problems, being honest about the realities of parenting, reviewing products, keeping your family safe, and tackling issues all new parents face.

You’ll find all sorts of information packed into my posts, plus free easy to follow checklists and guides in my free resource directory.

Who is Consumer News Mom?

Background check yourself for free: What other companies know about you may surprise you

My background “Fighting for you” as a consumer reporter

My career began behind the scenes at ESPN. A fellow Syracuse grad gave me my first break. My mission – log thousands of soccer games and create a video tape library system for ESPN International. 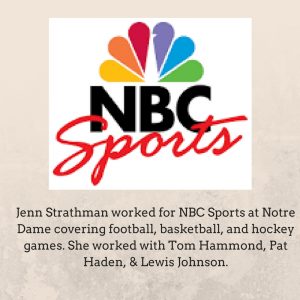 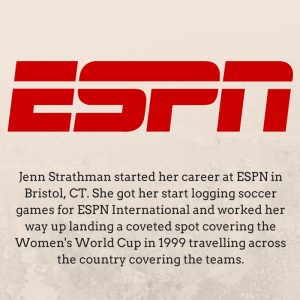 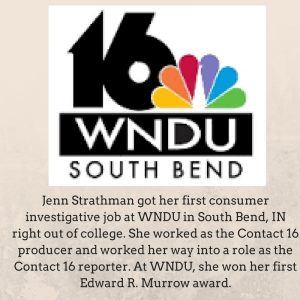 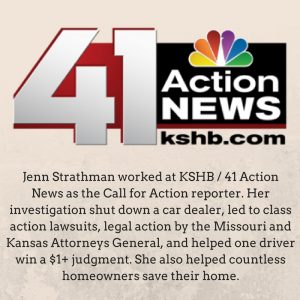 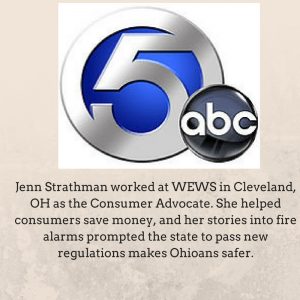 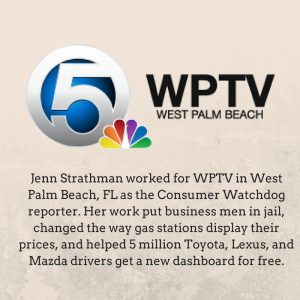 My career has taken me all over the country. It’s been an honor to cover your stories. I’ll never forget the night three missing Cleveland women were found safe. At first, nobody believed it. After 11 years in captivity, the kidnapped women were freed.

My efforts have saved consumers countless amounts of money. One driver won more than a million dollars in a lawsuit that focused on a ripoff at Chad Franklin Suzuki.

For years, drivers in South Florida dealt with melting dashboards until I exposed the problem and prompted car manufacturers to take action. Five million drivers are now getting a free dashboard. The repairs cost on average between $1500 and $7000. In Lexus, vehicles, even door panels are replaced as they are melting too. 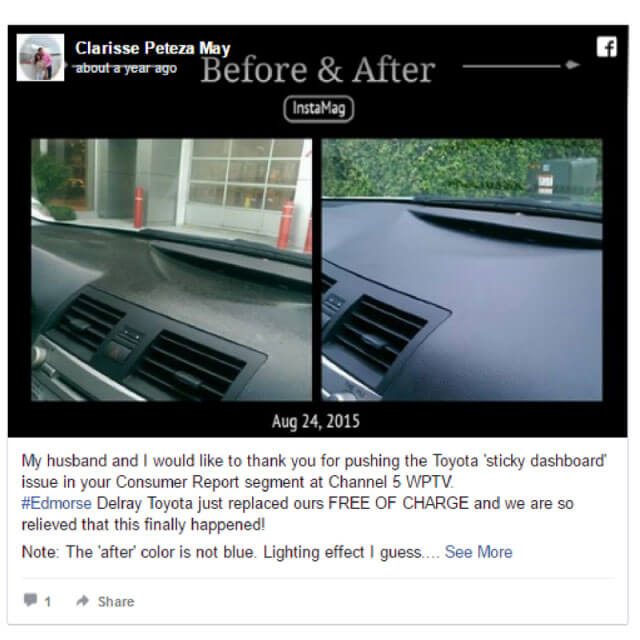 A real estate deal that I exposed sent a man to prison. The State Attorney filed charges after we exposed the trail of lost money, and a jury convicted him. 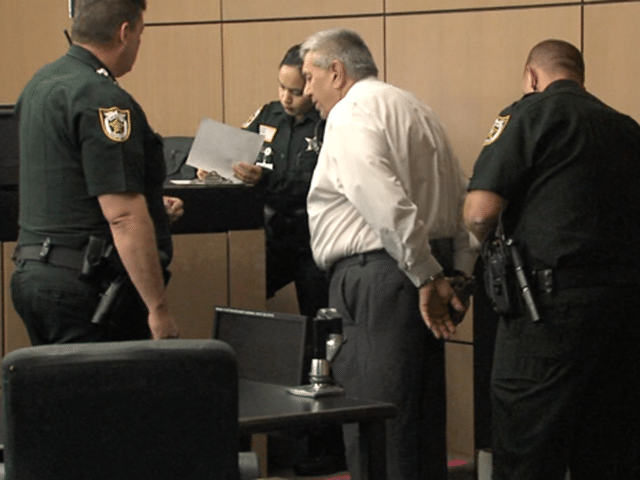 While consumer issues are my passion, so are community issues. For years, I exposed problems with Palm Beach County School buses. We had public records issues with the district for years. Finally, it came to a head when they refused to release records despite giving them more than enough time.

As an investigative journalist, sometimes part of the story is gathering the information to expose. Public records requests are time-consuming and full of challenges. Often, you hit roadblocks. We hit so many covering problems with Palm Beach County School bus cameras that I exposed the public records issues in a series called “Document Road.” After this series, coverage by The Palm Beach Post, and help from our corporate lawyer the school district released some records.

Fighting for you.” That’s the tagline I used when I ended a story. The stories you shared with me exposed fraud, shut down businesses, sent people to prison, forced car manufacturers to fix 5 million melting dashboards, led to class action lawsuits, and legal action from Attorneys General, and prompted new ordinances.

While you’ve seen me on TV for more than a decade, it’s now time to spend more time with my young daughter and focus my storytelling online. We moved back to Kansas City to allow my daughter to grow up with her cousins. I’m excited for the new opportunities and expanding this blog to better serve you.

Whether I’m on TV or writing, I’m still fighting for you.

As a new mom, I’ll be sharing my thoughts and insights on the best products for new parents, money saving sites, and sharing the daily challenges facing all moms while still bringing you the consumer advice and tips you expect from me.

I’ve won three Emmys, three regional Edward R. Murrow awards, and numerous Emmy nominations for my investigations. My stories have been recognized by the Ohio Associated Press, Kansas Association of Broadcasters, and twice by the Indiana SPJ.

I fight for you in the stories I cover, and in the community as a mentor for Big Brothers Big Sisters and volunteer with the Juvenile Diabetes Research Foundation.

Volunteering is as rewarding as my job. I joined Big Brothers Big Sisters as a tribute to my late sister. She was one month from graduating college with an education degree when she was tragically killed. It changed my life, and in honor of her I wanted to do something with children. It was her second-grade class that taught me that it’s okay to laugh again. I never expected a group of second graders to help me through my grief journey. 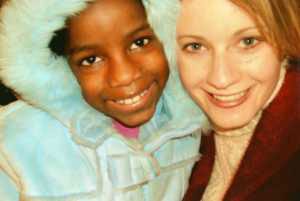 I also never expected being a “Big” would be so rewarding. I think I’ve learned as much as my “Little.” My second “Little” (the one in KC) was diagnosed with Type I diabetes about a year or two into our partnership.

It changed her life, and as challenging as it was, I’m glad I was there to help her family cope. It was the least I could do after so many people helped me through my personal tragedy. Now, I’m committed to doing everything I can to find a cure for the millions of children who have to wear an insulin pump. It’s my “Little’s” dream to be insulin free some day, and I hope in my lifetime that comes true. Our message was displayed on a billboard in Kansas City as part of a JDRF campaign. 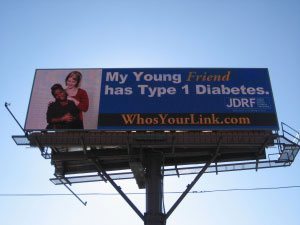 In my spare time, I also love to travel and take photographs. Some of my favorite places that you should add to your bucket list — rafting the Colorado through the Grand Canyon, Yellowstone National Park — the Disney World of Mother Nature, Slovenia, Switzerland, and New Zealand. On my bucket list: an African Safari.

Posting....
This site uses cookies from Google for advertisements, and to monitor site performance and traffic. Information may be shared between the platforms, but we never share personal information. This site also uses Facebook Pixel data to better serve and market to you.Got it!Learn more.