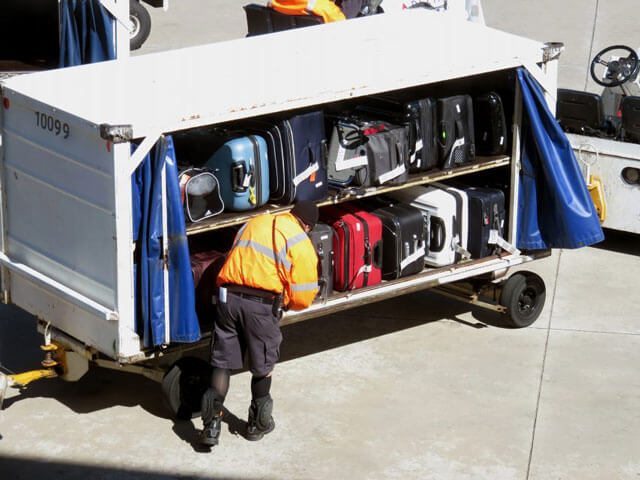 Flying is stressful especially for families with lots of luggage. As airlines charge for bags, more travelers squish everything they can into their carry-on luggage. However, airlines are enforcing carry-on bag size rules. That forces some passengers to check their bags even though they’re made to be a carry-on bag.

I’m not one to push boundaries, except when it comes to flying. I stuff my bag full, and hope to get it on the airplane for free. I don’t want to pay to check a bag. It’s an outrageous fee, that I don’t want to pay. If it fits in my carry-on baggage, it’s fair game in my opinion. After all, it is a carry-on bag.

That worked for a long time. Then the TSA agents stopped you at the security checkpoints, and had you measure your carry-on bag size. That’s when the problem got out of hand.

TSA and airlines are forcing passengers to check the size of their bag in that metal baggage sizer that sat unused for years. The rules always existed. They just weren’t enforced. So it was a shock to the system when the airlines began enforcing the carry-on bag size rules again.

Now that everyone brings a carry-on bag on the plane to avoid the checked bag fee, the airlines have space issues. So they have no choice but to enforce the rules.

Those metal containers near the check-in counter and at the boarding gate are finally being put to use. Goodbye dust. Hello bags. Airlines are forcing passengers to measure their bags.

The issue is typically the width of the bag. How much did you stuff inside? While it may not fit in the metal sizer, it doesn’t mean it won’t fit in the overhead bin. In my opinion, it’s just a way for airlines to collect another fee from you. They know there is not enough space in the overhead bins for every single passenger to bring a bag so they force those of us with stuffed bags to check them.

Here’s the big problem — every airline has different carry-on bag rules. While the sizes are similar, they do vary. Plus, luggage manufacturers push the boundaries so some so-called carry on bags are really the size of checked baggage. That’s why the International Air Transport Association (IATA) proposed uniform sizes for carry-on bags.

Delta allows you to track your checked bag

The IATA proposed a size of 21.5 x 13.5 x 7.5 inches. That’s smaller than most airline rules. However, the trade group said it would give those slightly smaller bags priority when there are restrictions on the number of bags that can fit in the overhead bins.

Airlines would know if your bag met this priority status or “IATA Cabin OK” guideline because the trade group would use a logo. That would tell airlines your bag is good to go. Say goodbye to those metal sizers.

“The development of an agreed optimal cabin bag size will bring common sense and order to the problem of differing sizes for carry-on bags. We know the current situation can be frustrating for passengers. This work will help to iron out inconsistencies and lead to an improved passenger experience,” said Tom Windmuller, IATA’s Senior Vice President for Airport, Passenger, Cargo and Security.

Within days of this announcement in June of 2015, the group pulled back on this initiative over concerns.

“Interest in the Cabin OK program has been intense,” the association wrote in a follow-up news release just days later. “While the value of this initiative has been welcomed by many, including a growing list of airlines expressing interest in the program, there has also been much confusion. In North America particularly, there have been significant concerns raised in the media and by key stakeholders.”

Instead of rolling out the new carry-on bag plan, the IATA reiterated that this is a voluntary program. Airlines make the rules and set the maximum luggage size rules. Their goal is to get rid of the uncertainty many travelers experience when airlines randomly decide bags are too big to be considered carry-on luggage.

Much of this backlash for this initiative came from airlines as well as travelers. Airlines for America (A4A) is an industry trade group representing the leading U.S. airlines. They said no U.S. airlines support the push for smaller carry-on bag rules.

A4A called the initiative “unnecessary” and is opposite of the airlines investment in larger overhead bins.

With that initiative taking a backseat as airlines don’t support it, travelers are still flying the friendly skies with some degree of uncertainty. I will say the baggage police are relaxing. For awhile, even TSA stopped you and your carry-on bag.

The enforcement of these rules comes and goes. In 2011 when I first wrote this article, the airlines were really tough on baggage sizes. It lasted a few years as airplanes downsized taking away flights. That made planes more full, and meant less room for bags. The airlines relaxed again. I rarely get asked to put my luggage in the bag sizer. Hopefully, this trend doesn’t start again. Now I have even more to stuff in my bag! All my child’s toys. Just 1 of 10 survival tips that get me through a flight with a small child, and our hotel stay.