“Facebook official.” It’s a saying we all use when we finally let the world in on intimate details of our lives. All the hoaxes are not official.

There’s one thing that’s not Facebook official — all the hoaxes. There seems to be a new one all the time targeting well-known brands. The goal of the scammers — to make you think it’s official because it’s on Facebook. The social media site is a great target for these hoaxes and scams because they spread so quickly.

They play on our emotions — fear and surprise. Surprise over a free giveaway of free flights or fear over Facebook charging for its site.

Like social media? How to use it to solve customer service problems

Steps you can take right now to avoid a ripoff

Many of these hoaxes come and go throughout the years. The latest one deals with Facebook charging to use its site, although the content of the original post has changed some. The new post doesn’t even make sense to me until you do some research. Perhaps that’s the new way to grab your attention. Confuse you so much you’ll fall for it. It never ceases to amaze me how many people fall for these things. 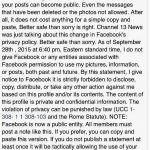 It’s unlikely Facebook will ever charge users. Never say never, so we’ll go with unlikely. If they do, don’t you think you’d be notified by more than just this cryptic post?

The opportunities are endless to prey on vulnerable people. By reposting some of these there is no harm. Others, like this fake Southwest promotion, your information could be compromised. It’s always a possibility. Hackers are sophisticated and they love to trick you into falling for their schemes.

ALL THE PHONE NUMBERS IN YOUR PHONE are now on Facebook! go to the top right of the screen, click on ACCOUNT, click on EDIT FRIENDS, left side of screen and click CONTACTS. you will see all phone numbers from your phone (FB friends or not) are published that you have stored in your mobile phone. TO REMOVE, go to RIGHT column, click on “this page.” please repost this on your status, so your friends can remove their numbers and thus prevent abuse if they do not want them published.

First, look at the list of phone numbers. It’s likely not every friend. For me, it was really a few dozen people. Facebook says you are seeing phone numbers that your friends added or numbers added when you synced your phone contacts with Facebook. The company says only you can see the numbers and calls the post a rumor.

The post is a rumor. The company says only you can see the numbers and calls the post a rumor.

It does raise some security concerns about posting your number on Facebook or any other personal or sensitive information. Remember, the more you disclose about yourself the easier it is for someone to find you or make you a victim of a crime.

If you are one of the consumers outraged by this, remove your phone number in your profile. Click Edit Profile and change the info. Also, un sync your phone and Facebook contact list. Finally, think before you post personal information that could be used in a malicious way.

Bottom line — think before you post. Your friends don’t want their feeds filled with garbage or posts that could compromise their information. Just because it’s on Facebook doesn’t always make it official.