Stop Judging Parents Who Use Infant Self Rescue Swim Technique 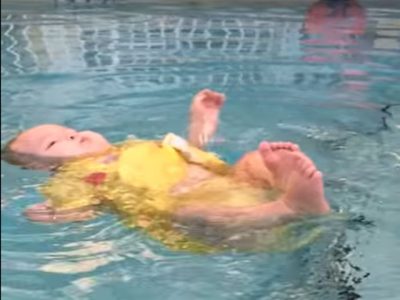 An infant sitting on a pool step in a bright yellow swimsuit falls forward and grabs a shoe that is intentionally placed in front of her. The Infant Self Rescue controversy. Is it a good safety lesson or too shocking for a baby?

When I saw the image of a baby falling into the water to grab a toy on national television recently, I knew the infant self rescue technique was in the national spotlight again. Little did I know at the time, it’s a child from the West Palm Beach area.

When I saw the image of a baby falling into the water to grab a toy on national television recently, I knew the infant self rescue technique was in the national spotlight again. Little did I know at the time, it’s a child from the West Palm Beach area.

Some news outlets call it “controversial parenting”, and that sparked a social media debate. Is this cruel? Is this the right thing to do? The child treads water in the video even after she flips herself over.

How Infant Self Rescue works

For those that don’t know, this child is learning the techniques involved with “Infant Self Rescue” or ISR. Before the child can walk or talk, they are taught how to flip themselves over in the water and swim to the side of the pool. It can be a life-saving technique. Making your child learn this technique involves intentionally dunking them in the water over a short period of time so they learn this behavior. Adults are nearby the entire time.

I can see how it’s alarming to someone who is not from Florida. When I first moved here, a colleague of mine showed me the videos of his daughter learning the technique. I couldn’t believe my eyes. At the time I wasn’t a parent, so swimming lessons were not exactly forefront of mind for me. I also wasn’t from Florida so I had not seen this before. So in that sense, I understand the harsh reactions and difficulty  the rest of the country has in understanding this technique.

Some of the coverage was fair and thorough. It’s the sensational stories that I also saw that really bothered me. They focused  on the video of the child falling into the water face-first after someone intentionally placed a shoe in front of her. They described the child as “struggling.”

No doubt there are two schools of thought on this. However, it’s no different than parents who use the cry-it-out method of parenting versus  those who comfort and soothe their child when they cry. You don’t see national news stories of babies crying in their cribs while the parents sit in the other room. Some people might find that cruel. For whatever reason, likely because a pool can kill you and crying in a crib won’t, it’s the swimming technique that gets the controversial headlines the most.

I sat in awe watching this local mom, Keri Morrison, own her moment in the spotlight. She spoke so eloquently and was so poised despite the criticism. Clearly this is not the spotlight she wanted. I’m sure she would have traded it in a heartbeat if it meant that heartbeat of her son still beat.

Morrison’s son, Jake, drowned in 2013. She now runs the Live Like Jake Foundation to raise awareness for drowning prevention. They also provide swim lesson scholarships to families who need help getting their child the lessons they need. The family strongly supports ISR, and I think it’s amazing how they are keeping their son’s memory alive.

Whether you believe in ISR or not, the Morrison family still deserves kudoes for helping raise awareness of drowning through their foundation. Jake is smiling down on you. He’s a lucky guy to have you as parents.

You handled your moment in the spotlight with poise and strength despite the negative chatter on social media. You found a way to rise above that and focus on what’s important — techniques that potentially save lives.

Teach your child how to swim

As a new mom, I’m eager to get my daughter into swimming lessons. That’s my focus this summer. I haven’t decided yet if I’ll do ISR or try traditional swim lessons first. I’m leaning toward ISR, but think I might do some traditional lessons first to get her comfortable with the water. At this point, she won’t even go in the water because it’s too cold. We’re taking baby steps, literally, but trying to get her to warm up to the water because it’s time to get her trained.

It’s unclear if swim lessons or ISR will make the difference if your child accidentally falls into the water. However, why take that chance? You need to arm your child with the skills they need so they have a fighting chance. The Morrison family lives with that regret each day, and should be commended for turning a tragedy into something so positive.

In Florida, water is everywhere. You need to make sure your child knows what to do just in case. It may seem strange to the rest of the world, but those people don’t live near so much water. I think it’s amazing a baby, often just six months old, knows how to flip themselves over in the water. Most babies can barely soothe themselves to sleep. Never mind save themselves from drowning.

There is a cost to ISR, and it’s not cheap. Swim lessons are definitely cheaper, but do they go far enough. It’s a decision I’ll make in the coming months. I know one thing — there is no price you can put on your child’s life.

As a parent, you can’t have too many layers of protection. Our children are naturally curious and you simply can’t keep an eye on them 24-7.